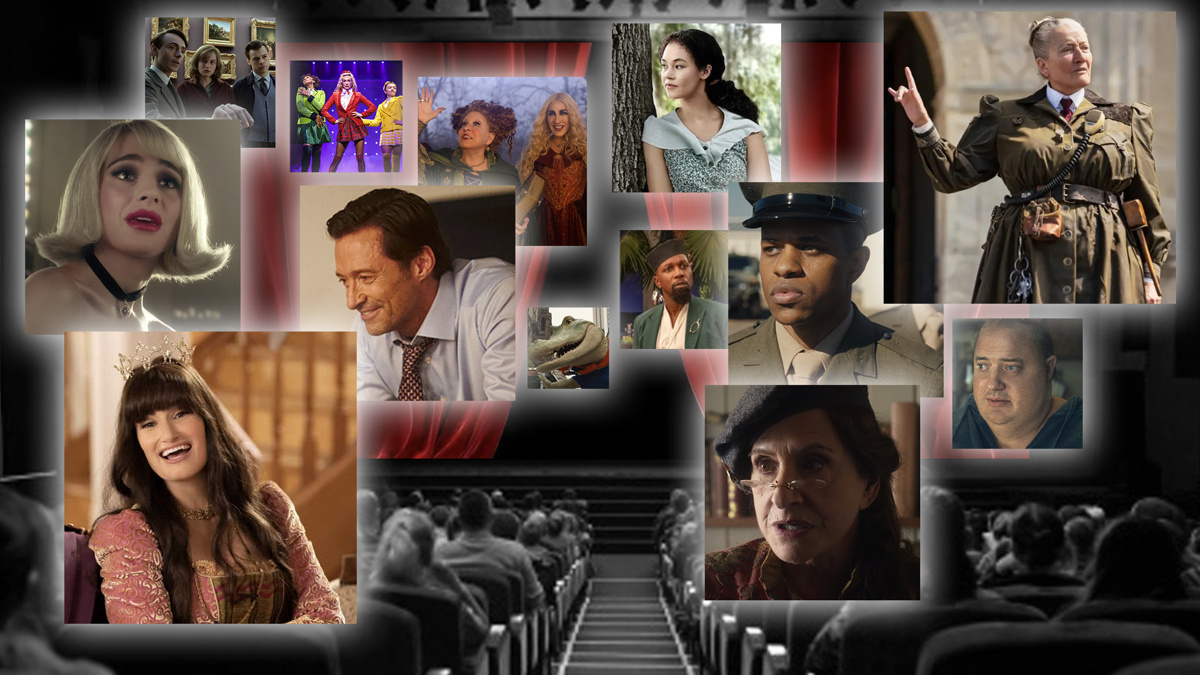 While this fall is full of new Broadway productions, there is also a bevy of stage stars hitting the big screen. From play and musical adaptations and filmed stage productions to theater directors, playwrights and stars lending their talent to movies, there’s something for theater fan in the fall film season. Read on for a guide to spotting your faves in the new movies coming out this year.

A Jazzman’s Blues
How to Watch: Streaming on Netflix
Theater Connection: Solea Pfieffer, Joshua Boone and Austin Scott
Almost Famous star Solea Pfeiffer and Broadway alums Joshua Boone (Skeleton Crew) and Austin Scott (Girl From the North Country) star in Tyler Perry’s tale of forbidden love and family drama that unravels 40 years of secrets and lies against a soundtrack of blues music in the Deep South.

Heathers: The Musical
How to Watch: Streaming on Roku beginning September 16
Theater Connection: Filmed on stage at London’s the Other Palace
Based on the 1988 movie of the same name, Heathers: The Musical is directed for the stage by Andy Fickman and features choreography by Gary Lloyd with a book, music and lyrics by Kevin Murphy and Laurence O’Keefe. This filmed stage production stars Ailsa Davidson as Veronica Sawyer, Simon Gordon as Jason “J.D” Dean, Maddison Firth as Heather Chandler, Vivian Panka as Heather Duke and Teleri Hughes as Heather McNamara. It was filmed at London’s the Other Palace, where the musical is currently running.

Lyle, Lyle, Crocodile
How to Watch: In theaters beginning October 7
Theater Connection: Benj Pasek and Justin Paul
This live-action musical is based on the bestselling book series by Bernard Waber and features original songs by Oscar, Grammy, Tony and Golden Globe Award-winning songwriting team Benj Pasek and Justin Paul (Dear Evan Hansen). Featuring Shawn Mendes as the voice of Lyle, the movie also stars Constance Wu, Javier Bardem, Brett Gelman, Scoot McNairy and Winslow Fegley. The movie is directed and produced by Will Speck and Josh Gordon with a screenplay by Will Davies.

The Son
How to Watch: In theaters beginning November 11
Theater Connection: Based on Florian Zeller’s Le Fils
The Son is based on Florian Zeller’s 2018 play Le Fils and serves as a follow-up to The Father, Zeller’s Oscar-winning screen adaptation of his Tony-nominated play of the same name. Starring The Music Man headliner and Tony winner Hugh Jackman, Olivier winner Anthony Hopkins and Laura Dern, the film tells the story of Peter (Jackman) as his busy life with his new partner and their baby is thrown into disarray when his ex-wife Kate (Dern) turns up with their teenage son, Nicholas. The play had a sold-out run at London’s Kiln Theatre, followed by a West End transfer in 2019.

The Inspection
How to Watch: In theaters beginning November 18
Theater Connection: Jeremy Pope
Two-time Tony nominee Jeremy Pope, who will appear on stage this season as Jean-Michel Basquiat in Anthony McCarten’s The Collaboration, stars in this drama about the closeted Ellis French who enlists in the Marine Corps.

Matilda
How to Watch: Streaming on Netflix beginning December 9
Theater Connection: Based on the award-winning musical
Based on the 2013 musical by Tim Minchin and Dennis Kelly and adapted from Roald Dahl’s children’s novel, Matilda is the story of a little girl who dreams of a better life. Alisha Weir plays the title role alongside Emma Thompson as Miss Trunchbull and Lashana Lynch as Miss Honey. Tony winner Matthew Warchus, who garnered one of his seven Tony nominations for directing Matilda on Broadway, helms the adaptation. Original scribe Kelly and songwriter Minchin are also part of the creative team.

The Whale
How to Watch: In theaters beginning December 9
Theater Connection: Based on Samuel D. Hunter’s The Whale
This psychological drama is based on Samuel D. Hunter‘s Drama Desk and Lucille Lortel Award-winning play of the same name. The film stars Broadway alums Brendan Fraser (Elling) and Sadie Sink (Annie) and tells the story of 600-pound middle-aged Charlie (Fraser) as he tries to reconnect with his 17-year-old daughter (Sink).